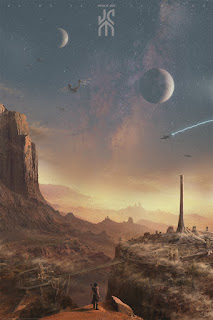 Worked with Mondo for this promo poster for the upcoming Disney IMAX 3D release 'JOHN CARTER'.

A lot of people have been waiting a very long time for this film to get to the big screen-after all, it's been 100 years since Edgar Rice Burroughs began writing about John Carter's Mars adventures, and those stories laid the groundwork for many scifi and fantasy properties of the modern age (Star Wars, Avatar to name two biggies). Based on the designs I've seen so far, it looks to be quite an impressive and unique vision of Burrough's world.

Tried a completely different approach for this one, as the poster is meant to mimic those large-scale, fully blown out scifi art promos you'd get with your fast food kid's meal circa '79 (just missing the folds of course!). This image is heavily based on the more realistic, 'grounded' designs contained in the concept art for the film, as opposed to more fantastical interpretations by Frazetta and other illustrators who have largely defined the look of Burrough's Mars over the last century.

Wow! Gorgeous! Any chance this'll be available outside of midnight screenings!?

Love it! You're stuff just gets better & better! Congrats!

Amazing work! I second First Dark's request for its availability outside midnight screenings, as I won't be able to attend one (though I'd love to!).

I got one of these at a screening last night, but it's about half the size I was hoping for. I really hope that there will be a full 24x36 version made available, because I think the artwork deserves to be seen as large as possible!

Absolutely beautiful, stunning poster. The sense of scale is absolutely epic. Best poster I've seen in years, almost makes Drew Struzan look silly. I take my hat off sir, I will fight to the death to get a copy to hang in my room.

Man I absolutely love this print.. Plus I think the movie was very underrated but I still loved it.. I think this poster encapsulates the grandeur of the movie... I unfortunately will more than likely never be able to get my hands on this poster... I wish I could!!! Great work!