"How Time Slips Away" - New Print for July

Solitary adventures are nice to have every so often, but without a companion to share them with (human or otherwise), sublime moments like this one just don't seem to mean as much...

This scene is dedicated to a friend who has been constantly either underfoot or at my side for 13 years now. He's an old man by canine standards, but still the best pup there ever was..

I'll plan the onsale for this one as soon as I get the Three Voices stuff shipped out this week.-JC
Posted by JC Richard at 5:00 PM 1 comment:

Some Odds and Sods..

San Diego Comic Con came and went without a new post! Had a blast meeting a lot of you on the floor both inside and outside the Convention Center, and will have more of pics and news to share about the entire experience a bit later in the week. Let's just say I made a few great decisions, a whole lot of mistakes, and a sincere vow to do the whole thing much better next year. 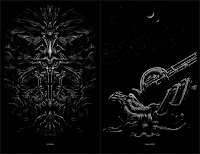 If you were following me on Twitter you know I finally made it to the floor on Saturday morning, after a 6 hour traffic fiasco on Friday. The Mondo crew, gracious and helpful as always, were handling all the tough stuff for the Prometheus poster drop/signing happening at 2PM, so I had time to wander the area and give out a few sets of mini prints printed up as an exclusive of sorts for folks who had made it out to the Con (and braved the crowds to find me amongst the vast sea of humanity!). Meeting all those people who shared the similar interests and passions was an awesome byproduct of the giveway; my only regret was I didn't have more to give out... definitely going to do something like that again.

That reminds me.. anyone going to Boston Comic Con this weekend? I'll be there at least one day, but not working...

THREE VOICES/SHIPPING:
The printing is done and I had hoped to start shipping these last week, but a delay on the vendor end has them still in transit to me. They good news is they look great and should be here any day now; as soon as they arrive, I'll sign/number/ship out ASAP.

JULY GUILD PRINT:
Glad you asked. Let's do the reveal later today (7/29)- just let me get some sleep first!

Hello friends- Welcome to "The Three Voices" onsale! Just click on the paypal button below to purchase-

UPDATE: Thanks so much for the purchases everyone!-JC

If anything goes weird or you run into an issue, just shoot me an email and we'll work it out. Thanks again everyone for all the support!-JC
Posted by JC Richard at 2:00 PM No comments:

Hello friends- been a few weeks since I've shared some studio news so here we go...

Happy how this one turned out, started off a simple study and morphed into something a bit more layered. Also has a nice transparent rain layer to complete the effect. Many have asked about what is written on the wet, weathered note in the foreground-- maybe I'll tell, maybe not. Whatever it says, after reading it our lone figure needed some time to reflect...

SDCC FYI: Happy to report that I'll be at San Diego Comic Con on Friday and Saturday this year- can't wait! Not sure of my schedule yet but will update the details as soon as I find out. Hope to see some of  you there!

That's all for now, hope to see some of you back here on Wednesday for the 'Three Voices' onsale! -JC
Posted by JC Richard at 10:44 AM No comments: