Wanted to share a few details about my submission to the IN PROGRESS Mondo Gallery show that opened tonight in Austin. Looked like a great show to see in person- some of the more 'finished' pieces there were astounding; if you haven't checked out the images online, you should do that now.

My submission was a rougher concept piece- the "main body" pencil sketch for my Jurassic Park poster, and the first thing I ever did for a Mondo project. 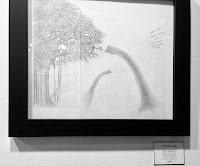 I'm not very precious with most of my sketches, as they often start on whatever's handy at the time of inspiration- notepads, paper bags, backs of receipts; this one was no different. The sketch started as just a Brachiosaurus study on a single worn sheet of paper, and spilled onto a second as the tree concept came up as I worked. It remains the only sketch of this part of the final poster; after roughing out the tree and attempting a few quick wisps of clouds and foliage on the bottom, I decided to just mount the 2 halves together for a scan and jump to the tablet.

Using the pencil as a guide, I re-drew the rough as a separated color, adding the leaf and body detail seen on the final poster. As soon as color choices fall into place, often one sketch will be split up to form more than one layer; in this case I used the single sketch to draw 2 layers (see above)- one became the 'gray' making up the main body of the tree and brachiosaurus, and various small sections were drawn on a second layer as a transparent yellow to add misc. details to flat colors beneath. In fact, most of the leaves ended up on a third 'green' layer not shown here. The final poster ended up as 10 screens: 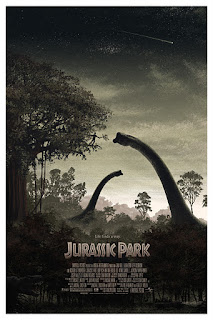 Seeing how artists create has always been something I really enjoy. And this print is one of my favorite things I've ever seen, so to stumble on this post was just great. I hope to one day have enough to own one!